Hugh Regardso and Sidney Thomas Wilton were two of the five sons of Thomas and Annie Wilton.  They both farmed with their father in Mangamutu, Pahiatua before enlisting together on 12 October 1915 and then embarking with the New Zealand Rifle Brigade on 5 February 1916.  On his last leave before embarking Hugh married Isla Mary Macdonald.

On arrival in France Hugh contracted measles and was admitted to hospital in St Omer on 12 July 1916 he rejoined his unit on 21 July 1916 and was most likely reunited with his brother.  As with all the stories on my blog this one has a tragic ending.  Hugh and Sidney were both on the Somme on 15 September 1916 at the Battle of Flers-Courcelette when they were both killed in action.

Only months earlier the Wilton family had been farewelling their two sons, never would they have imagined that they would lose both their sons in the same battle on the same day

Sidney Wilton is remembered on the Caterpillar Valley (New Zealand) Memorial which commemorates more than 1,200 officers and men of the New Zealand Division who died in the Battles of the Somme in 1916, and whose graves are not known. 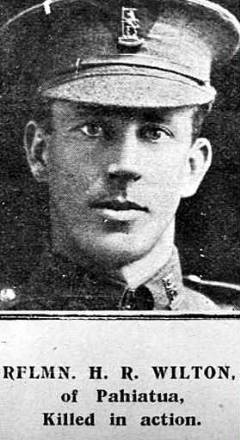 According to Hugh Wilton's Military record he was buried at the time of the battle.  His body was then exhumed after the war and buried at the Bulls Road Cemetery, Flers.

The men below from the Pahiatua memorial were also killed in action on 15 September 1916: