More heroes from the Carterton Memorial

Sergeant James Nicholas O'Donnell a carpenter from Carterton embarked 26 April 1917 attached to the New Zealand Rifle Brigade.  He was awarded a Military Medal for gallantry for and his actions which have been remembered in several books on the Great War.  He was killed in action on 3 November 1918 at the relief of Le Quesnoy only days before the armistice.

London Gazette, 16 July 1918, p8334, Rec No 2074: For conspicuous gallantry and coolness during the operations on the right of Hebuterne on the morning of the 27th March 1918. In charge of a section of 20 men, the enemy surrounded his party, calling on them to surrender. Lance Corporal O'Donnell at once charged the enemy with bayonet and, calling on his party to follow him, succeeded in driving the enemy back, inflicting heavy casualties. His magnificent example greatly inspired his men.
http://muse.aucklandmuseum.com/databases/Cenotaph/11659.detail?Ordinal=2&c_serialnumber_search=48063


Trooper Neil Mclaren Douglas embarked with the 15th Reinforcements, NZ Mounted Rifles Brigade on 13 July 1916.  He received a Military Medal for gallant conduct during an attack on Beerseba on 31 October 1917 where he was slightly wounded and remained with his unit, the following link is an account of the attack http://www.nzmr.org/beersheba.htm.  Today Beersheba is in Southern Israel.   Almost a year later, on 6 October 1918 he was admitted to hospital sick with Malaria.  He never recovered and died on 19 October 1918.  He was buried at the Ramleh War Cemetery the next day.

Trooper John Leybourne Grace's war was a short one and he did not win any medals for gallantry but he should like all those who gave the utlimate sacrifice be remembered as a hero.  The only son of the late Nathaniel Grace and Emily Grace of Carterton he was keen to enlist.  A  shepherd on the Ngakonui farm a hill country farm South East of Martinborough  he enlisted at Dannevirke on 12 August 1914 where he stated his date of birth as 4 November 1893 making him 20 years old and eligible for enlistment (20 years old being the minimum age for enlistment).  However further research on the Department of Internal Affairs death register revealed that his birth was registered in 1895 thus he was underage.  Trooper Grace embarked with the main body on 16 October 1914 and was killed in action at Gallipoli on 30 May 1915 aged 19 years old.

The grief felt by his mother at losing her only son in a battle he was too young to fight is unimaginable - I wonder if she had, had any notion that her son had enlisted under age before he turned up in uniform to say goodbye before embarking  Dannevirke is a fair distance from his place of employment and Carterton where his mother lived and he most likely enlisted there as his real age would have been unknown to the local people.  This of course is not a unique story as many young men lied about their age and some older men too (the maximum age was 38 years) so that they too could do their bit for King and country. 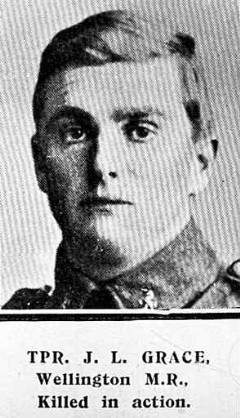