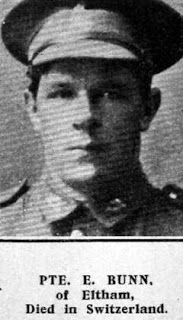 Ernest Bunn was born in Murchison in 1892 the son of Elijah and Amy Bunn.  Before enlisting on 25 May 1916 he was a blacksmith in Eltham, Taranaki working for his brother Levi Bunn.   He embarked aboard the Pakeha on 27 September 1916 with the Wellington Infantry Battalion.

On 21 February 1917 he took part in a large dawn raid made by the 2nd Battalion Auckland Regiment at Fleurbaix.  Casualties from the raid were initially thought to be light however it was soon revealed that 22 men had been killed, 107 wounded with 56 missing.  Bunn it turned out was both missing and wounded (grenade splinter to forearm).  He had in fact been captured by the Germans along with several others.  Initially treated for his wounds he was then transferred to a camp in Munster, Germany.  In December 1917 Bunn was transferred to Switzerland under agreements made between the the Swiss Government and the French, British and German Governments that a certain number of wounded prisoners of war would be interned in Switzerland.  Below is a newspaper article with a report from a soldier who was captured at the same time as Bunn.

For Bunn's family back in New Zealand news of his repatriation to Switzerland must have been well received knowing that Ernest was now out of danger and would in time be returned safely.  Bunn himself expressed this hope in a thank you letter he sent to the Eltham Patriotic committee whilst interned in Switzerland noting:

"...having a fairly good time and I hope it will not be very long before I get back to New Zealand, for although this is good there is no place like 'home'."

This hope was short lived as Ernest succumbed to the Influenza epidemic of June 1918.  He died on 7 July 1918 at 5.45am and is buried in Vevey (St. Martin's) Cemetery, Switzerland together with two other NZ soldiers from WW1.