On the Waipukurau Memorial the name of Private George Turnley Cox is inscribed. He died of his wounds on 14 May 1915 aboard the 'Guildford Castle' on route to Alexandria from Gallipoli at the age of only 20 years.  George was one of the six sons of Edward and Louisa Cox of Wanganui who served overseas in World War One (WW1).  For the majority of us having one son go to fight in a war is unthinkable. Having six sons embark for war is unimaginable.  For Louisa and Edward Cox WW1 was surely a time of fear and hope, fear that a son may not return and hope that they would all come through unscathed.  But as we know today that was not likely to be the case in this war. 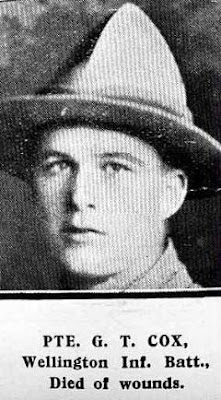 George was the first of his brothers to enlist doing so on 14 August 1914 (his brother Edward enlisted 3 days later). Before enlisting he had been a clerk for the Loan and Mercantile company in Waipukurau.  At enlistment he stated his year of birth as 1894 when in fact he was born in 1895 making him underage for overseas service.  Nevertheless he embarked on 16 October 1914 with the Wellington Infantry Regiment as part of the Main Body.  At Gallipoli he described the fighting as "desperate" and on 9 May 1915 he was fatally wounded with a gunshot wound to the neck.  He died aboard the hospital ship 'Guildford Castle' and was buried at sea and is remembered on the Lone Pine Memorial.

His brother Edward Percy Cox, who was nine years his senior, kept a diary of his time spent at Gallipoli which has been transcribed onto the New Zealand Electronic Text Collection, (NZETC). In his diary is an entry which refers to George's wounding.


"My brother George was severely wounded Sunday morning in the trenches & unfortunately it was not possible to get him out to the rear until this evening after dark. He was however given first aid & cared for in the trenches as far as possible. The poor boy does not even recognise me. This evening and the medical officer has grave fears for his recovery. The bullet entered the base of his neck and appears to have injured the spinal column. Everything possible is being done for him by Capt Home at our regimental unit post and I do hope that he will rally sufficiently to speak to me before going off to the hospital ship."

Edward did not learn of his brother's eventual death until 8 June 1915.

Edward Percy Cox enlisted in Hawera on 17 August 1914 where he was employed as a Commission Agent.  Before enlisting he served with the Taranaki Rifles as a territorial and had reached the rank of Captain. Like his brother he left with the Wellington Infantry Battalion on 16 October 1914.   In the Dardenelles he was promoted to Major and as mentioned kept a diary in Gallipoli which gives a first hand account of the Gallipoli campaign. (http://nzetc.victoria.ac.nz/tm/scholarly /tei-CoxDiar-t1-body-d8.html )  Edward was severely wounded on 15 August 1915 and was eventually invalided back to New Zealand returning on the Arawa on 16 March 1916 and was discharged from the New Zealand Expeditionary Force on 6 May 1916.  After his discharge he served on the Government Military Board for the remainder of the war and then after the war he served on the Hawera Peace Memorial Committee.  Despite only being in action a few months Edward Cox distinguished himself and was twice Mentioned in Despatches:

MID 13.7.16 L.G. p6959
For distinguished and gallant services tendered during the period of General Sir C. Munro's command of the Mediterranean Force.

In the meantime a third son Mervyn Francis Cox had enlisted and embarked with the 4th reinforcements, Wellington Mounted Rifles on 17 April 1915.  Tragically he was killed in action on 27 August 1915 at Anzac Cove.  Initially reported missing he was confirmed killed in action on 23 January 1916, he was 23 years old.  He is remembered on the Hill 60 (New Zealand) Memorial, Hill 60 Cemetery, Turkey. 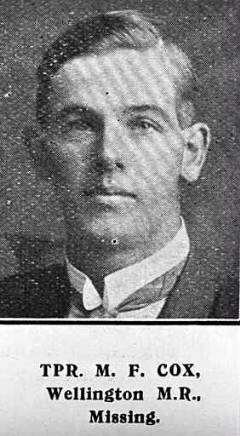 For Edward and Louisa Cox the Gallipoli Campaign had been wrought with heartache and grief.  Within the space of three short months two sons had died and another was badly wounded. With three more sons at home and in camp they must have been praying for a rapid end to the war.

Norman Davidson Cox was the third son of Edward and Louisa Cox being employed as a  bookseller for H.J. Jones & Son Ltd in Wanganui.  Norman enlisted on 4 November 1916 embarking with the 32nd reinforcements, New Zealand Rifle Brigade on 21 November 1917.  Norman had been a member of the Territorials before the war and his rank during WW1 was that of 2nd Lieutenant.  He was killed in action late in the war on 31 August 1918 at Bapaume, France and is buried at the Grevillers British Cemetery.

When news of  Norman's death reached Edward and Louisa it must have been devastating and made worse by the fact that their sixth son Leslie Stuart Cox, who had recently embarked aged 20, had been wounded on 30 August 1918.     How they coped with so much grief is beyond my imagination.

After he was wounded Leslie Cox was sent back to England to recover and luckily never went back to the front embarking for New Zealand on 2 December 1918.  Leslie Cox died in 1945, aged 48.

Cecil Turnley Cox was Edward and Louisa's eldest son and he served throughout the war as a Ship's Quartermaster on the Transport ships Tahiti and Maunganui.  He embarked first on the Tahiti carrying the 7th reinforcements and continued to sail until the end of the war being discharged in January 1919.

Edward and Louisa must have been afraid that the war would linger on until their last son Harry, who in 1918 was approaching the age of eighteen, would be old enough to enlist.  When the war finally came to a close in November 1918 the Cox family must have felt both elation and great sadness.  Their family had certainly "done their bit" as three sons had given their lives and two had been wounded with only Cecil coming through the war physically unscathed. The toll on the entire family must have been immense.

All three Cox brothers who gave their lives in WW1 are remembered on the Wanganui Memorial.