On the memorial at Waipukurau are the names of three brothers Gilbert Vere Bogle, Gordon Kennedy Bogle and George Stafford Bogle who were the sons of James and Annie Bogle.  They all attended Napier Boys High School and studied at Victoria College, Wellington and had promising careers before war broke out.  Each took a different route to war but sadly their fate was to be the same at the end. 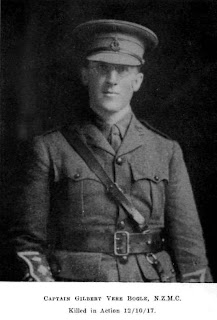 Captain Gilbert Vere Bogle taught at Wellington College from 1905 until 1908 then he went to Edinburgh University to study medicine.  On returning to New Zealand he went into partnership with Dr Godfrey in Waipukurau from where he enlisted.  On 17 July 1915 he married Margaret Fell and shortly afterwards embarked with the New Zealand Rifle Brigade as a medical officer on 9 October 1915.  He served in Egypt and the Western Front.  Margaret his wife, travelled with her mother to England to be closer to her new husband.  Her father was also a doctor serving in a Military Hospital in England. This is where she was when the news of her husband’s death reached her.  Gilbert was killed in action on 17 September 1916 at Flers, France.  I have found many reports of his death and of his actions at the dressing station at Flers which no doubt saved many lives.   Below is an extract from a letter printed in the Wanganui Chronicle which reports on Gilbert's remarkable devotion to duty which no doubt would have been of some comfort to his family including his wife who had only a few months earlier given birth to their first child, a daughter Belinda.

He actions were Mentioned in Dispatches with his citation below:

London Gazette, 4 January 1917, p262, Rec No 340: For special devotion to duty at Flers on the 15th and 16th September 1916. Captain Bogle, New Zealand Medical Corps (Regimental Medical Officer attached 1st Battalion, 3rd New Zealand Rifle Brigade), established an aid station near Flers on 15th September and organised dressing and evacuation of wounded of his own and other units, a very large number passing through his station. He worked ceaselessly in the open under continual shellfire for 36 hours without rest or meals until he was killed by a shell five (5) minutes before the Battalion moved out on relief on 16th September. His untiring efforts undoubtedly saved many lives and throughout he displayed an extraordinary devotion to duty. The work done by this officer since the arrival of his Unit in France last April has been exceptionally good. He has always shown great interest in his work and the low sick rate of his Unit is material proof of his excellent work. 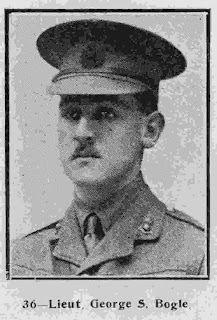 Gilbert was the second son of James and Annie Bogle who gave his life in WW1.  George Stafford Bogle was a civil engineer who for a time had been employed by the Public Works Department in Whangarei before travelling to Canada to gain more experience. It was while in Quebec he enlisted in September 1914 with the Canadian Engineers.   Once reaching the UK he gained a commission with the British Royal Engineers becoming 2nd Lieutenant.  He left for Gallipoli with the engineers of the Scottish Division.  He died of his wounds at Suvla Bay on 15 October 1915 aged 26 years. 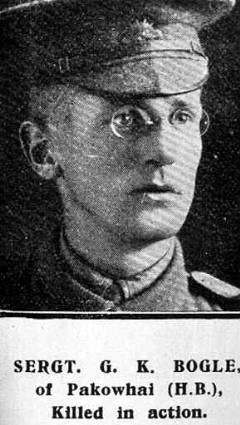 Gordon Kennedy Bogle was an architect before enlisting on 20 September 1915 at  Lismore, New South Wales, Australia where he lived.  He embarked on 28 March 1916 with the 26th Battalion, 10th Reinforcements.  He was killed in action by shellfire at Broodsiende Ridge, Ypres, Belgium on 20 September 1917 exactly two years after he had enlisted. No burial was recorded.  He was 28 years old and is remembered on the Menin Gate Memorial.  I found a note in his military record recording his personal effects which were returned to his family. They consisted of his identity discs, wallet, photos, note book and a silver cigarette case.  I should imagine these few items remained precious reminders of their son.

For James and Annie Bogle receiving three telegrams telling them of the deaths of their sons must surely have been devastating together with the knowledge that a fourth son 2nd Lieutenant Archibald Hugh Bogle  known as Archie was also serving at the Front.  Archibald was serving with the New Zealand Engineers.  A Civil Engineer before enlisting he served with the NZ Tunnellers, he survived the war returning to his wife, two young children and his grieving parents.   After the war Archibald became a successful Civil Engineer and died in 1972 aged 89 years.